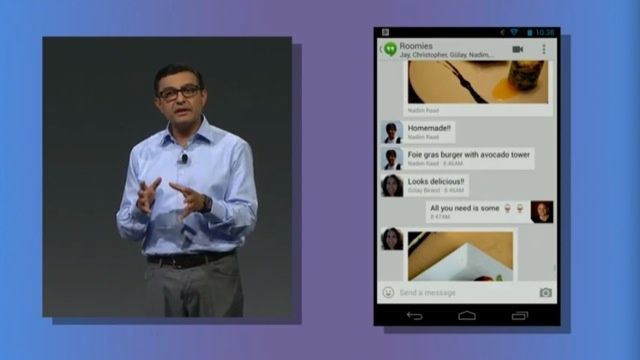 What happens when Google folds GTalk, Voice, Hangouts and Google+ Messenger into one mega-app, then releases it for Android, iOS and the web, all at one go? The new Google Hangouts: Google’s universal messenging apps.

Think of Hangouts as Google’s answer to iMessage, but supercharged, and you’ve got a good idea. A atandalone app, Google Hangouts allows yout to have an on-going conversation with a circle of Google+ contacts and friends, and chat with them through messaging, upload pictures, and so on.

All Hangouts are archived, and can be referred to back to the beginning of time, meaning you can share photos with your family, hold off for a few months, then jump back in without a hitch.

Ease of use is also a big part of Google Hangouts. A single button press, for example, will initiate a group video chat almost immediately.

The new Google Hangouts is cross-platform, and notifications are synced across all devices.

It sounds pretty swank. In Apple terms, it’s iMessage, Facetime and Facebook all rolled into one, and available on any device under the sun. The new Google Hangouts should be available today for all platforms.