Android 4.2 Jelly Bean did not bring any new major feature, but it did bring some usability enhancements like a gesture typing keyboard and lock screen widgets. The current implementation of lock screen widgets in Android 4.2 is pretty poor, though, with the restriction of only one widget and no permanent maximised mode.

However, the ability to keep multiple lock screens with a widget should be a decent workaround for the majority of people out there.

Lock screen widgets will provide access to all your important updates or notifications from your favorite apps or services in just a single glance, without requiring you to unlock your phone every single time. They are especially handy if you use a pattern or numeric lock on your smartphone, since you can view all your important notifications without the need to unlock your phone.

Here are our favorite lock screen widgets for Android.

DashClock is an alternative lock screen widget from one of Google’s own developers, Roman Nurik. DashClock, via extensions, allows you to have multiple widgets on a single lock screen. With the help of third-party extensions, you can have all your important information and notifications via DashClock at a glance on your lock screen including your missed calls, SMSs, emails, alarm, battery status, short cuts to your frequently used apps and much more. 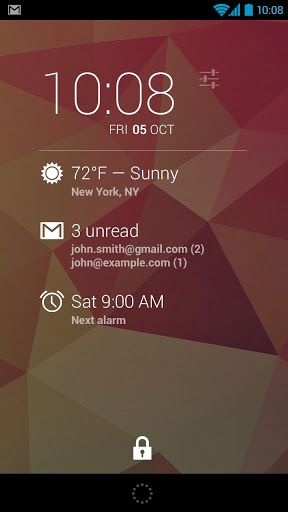 The Play Store is filled with thousands of weather widgets and apps. Most of them look beautiful in their own right, and do their job of adding the wow effect to your home screen. After all — let’s accept it — how many people actually use a weather widget to actually know the current weather?

HD Widgets/Beautiful Widgets are among the most popular weather apps available on the Play Store, and both feature a lock screen widget that shows the full weather detail when maximised, and only the current weather when minimized. If you are looking to just add a wow factor to your lock screen, you cannot go wrong with either of them.

If you are among the minority that still use their smartphone for its primary purpose i.e. to make calls, Simple Dialer Widget is for you. The widget basically places a dialer right on your lock screen, so you can directly dial a number without needing to unlock your phone every single time. The widget also allows access to your call log and contact list to make your life easier.

The CyanogenMod team includes a very hand cLock lock screen widget with CyanogenMod 10.1. The widget provides you with weather updates, and also displays your calendar entries right on the lock screen, making it perfect for people who like simplicity.

You can manually install the cLock widget on your Android 4.2+ device by downloading the APK from here.

After Weather apps, the Play Store is filled with a plethora of To-Do apps. While most of them are of high quality, two apps which standout from the rest are Tasks and Any.Do. The former has a very simple Holo based theme, while the latter has a gorgeous UI that is inspired from Metro. However, both the apps share one common objective of allowing the user to focus solely on his pending tasks, and not spend time on organising them in various folders or categories.

Both the apps are among the most popular To-Do apps in the Android community, and feature a very useful lock screen widget that solely focuses on displaying all your pending tasks and nothing else.

Android Pro Widgets is a collection of multiple, Sense UI inspired, widgets. It contains multiple widgets for different purposes including a widget for Bookmarks, Facebook, Twitter, Messaging, and Calendar. If you are looking for a beautiful Twitter or Facebook widget or a widget for quick access to your bookmarks from your lock screen, Android Pro widgets will definitely get the job done.

The paid version of Android Pro Widgets also includes a Google Reader widget, which should help in satisfying your news hunger right from your lock screen.

If you frequently take notes on your Android device, a Google Keep widget is going to be invaluable on your lock screen for jotting down those quick notes.

There are a lot of other useful lock screen widgets available on the Play Store as well. Battery Widget Reborn has a stunning battery percentage widget that you can use as a lock screen widget. I won’t recommend keeping Wi-Fi, GPS or any other Power toggles as a widget on your lock screen, since you might just unintentionally tap and activate them.

If you are using any other lock screen widget that you find particularly useful, drop in a comment and let us know!