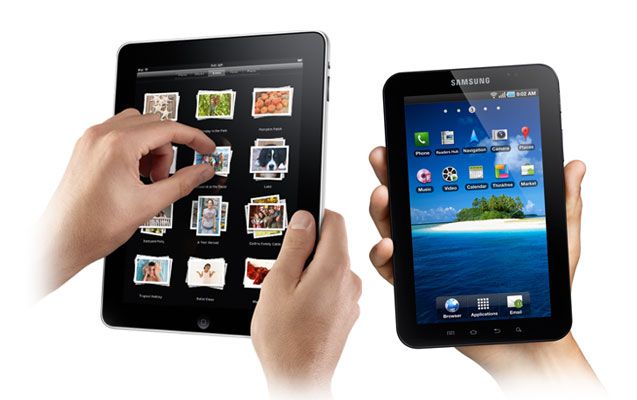 The International Data Corporation (IDC), an firm that analyzes tech trends around the globe, released its quarterly Worldwide Tablet Market Study today, showing that tablet sales show no signs of slowing down any time soon.

The study shows that tablet shipments have increased 142 percent year over year for Q1 2013. Tablet shipments totaled 49.w million units in this first quarter, surging past the entire first two quarters of 2012 combined.

All tablet makers saw huge gains in the tablet space, though Apple’s overall share of the market is decreasing. The iPad is still the world’s largest tablet being sold, with 19.5 million shipping in the last quarter, up from 11.8 in last year’s Q1, an increase of 64 percent.

Samsung, however, is seeing even faster growth, from 2.3 million units shipped last year in Q1 2012 to 8.8 units shipping in this past quarter. Asus and Amazon both doubled their tablet shipments from last year as well, while even Microsoft, which wasn’t selling Surface tablets last year until October, shipped some 90,000 tablets during the last quarter.

What this all shows is that Android is currently the most popular mobile OS for tablets shipped in Q1 2013, with Android shipping on 27.8 million tablets as compared to Apple’s 19.5 million iPad models. That may sound like a bad rap for the company that created a stable market for the tablet, but their iPad sales are increasing every quarter, thank you very much. Apple is still selling more than twice as many tablets as Samsung, for example. And Android comes installed on many more manufacturer’s devices, making the competition tougher than just fighting one competitor alone.

“Sustained demand for the iPad mini and increasingly strong commercial shipments led to a better-than expected first quarter for Apple,” said Tom Mainelli, the Research Director of Tablets at IDC. “In addition, by moving the iPad launch to the fourth quarter of 2012, Apple seems to have avoided the typical first-quarter slowdown that traditionally occurred when consumers held off buying in January and February in anticipation of a new product launch in March.”

Don’t count Microsoft out, just yet, though. “Recent rumors have circulated about the possibility of smaller screen Windows RT and Windows 8 tablets hitting the market,” said Ryan Reith, the Program Manager for IDC’s Mobility Tracker program. To truly compete, Microsoft will need to move with the current trend toward smaller, seven to eight-inch tablets with lower cost.

“If these challenges are addressed,” said Reith, “along with the desired screen size variations, then we could see Microsoft make even further headway in 2013 and beyond.”

The top three tablet makers, then, are Apple, with a dominating 39.6 percent market share, Samsung, with a 17.9 percent share, and then Asus, with a 5.5 tablet market share for the past quarter.