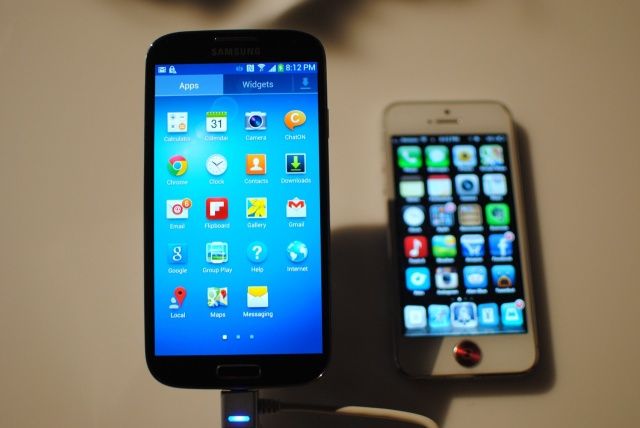 At one point during Samsung’s tacky Galaxy SIV launch event at the Radio City Music Hall in New York, the emcee — upon asking what the point of a screen that could react to gestures in mid-air without actually touching it, and being treated to a Greek chorus of answers from a constabulary of shrill, histrionic shrews — said of Samsungs new Air Gestures: “Okay, I see how that might be useful.”

Those words really sum up everything Samsung put up on stage tonight. I see how that might be useful.

The Galaxy SIV is a phone largely unchanged from the SIII. It’s a little thinner, a little lighter, a little more powerful. It has a bunch of new features. And all of them require a small one-act play on one of the most important stages in Manhattan to explain why, in a certain circumstance, they might be useful.

I want to be very clear: the Galaxy SIV is just a beautiful phone. Really.

Sure, it doesn’t quite have the chamfered chops of the iPhone 5 or the HTC One, but it feels light in the hand, and thought the body is as plasticky as it ever was (Samsung clearly feels as strongly that easily dropped phones should be made of plastic as Apple does that aluminum and glass are the base matter of a well-designed universe) this is a good looking, beautifully designed device, just like the SIII before it. Maybe a little more so!

You know, I think it’s okay to say that maybe, just maybe, smartphones have been honed to the point where it’s just not possible to revolutionize them every year. It’s okay to just refine them, to scrape away the little bits of gristle and bone that still cling to the femur until you’re left with a bleached bone that represents a truly perfect smartphone experience.

Samsung’s got its own idea of what a smartphone should be, in other words. A big, plasticky device that is hard to break, super powerful and looks, well, like a Galaxy S III. Or SIV. Or Galaxy Note II. Because they all pretty much look the same now. But I’m okay with that. Like I said, it’s a beautiful phone, and in its construction, about the only thing I have a problem with is the “purity” of the materials used: I’m a glass-and-aluminum man, myself.

So it all boils down to the features. And that’s the problem, because tonight, what Samsung showed off was gimmick after gimmick. Features no one will use except in very specific circumstances… so specific, that Samsung actually felt the need to put on small miniature plays illustrating the use of each one.

Oh, sure, Samsung try to spin it. “We’re in the greatest theater in the world, so let’s put on a show for you!” the M.C. jovially cried.

What followed a pageantry of pedestrianism, in which the finest of New York’s under-employed off-Broadway up-and-comers came out and earnestly squirted out lines written for them by marketers and PR drones, all centered around a pervasive theme: “That seems like it could be useful.”

Watch, for example, as the Galaxy SIV’s new ability to add a snapshot of the photographer (and the sound of his voice!) are inserted into a shot of what he is actually taking a picture of, extolled in a small vignette about a father agonizing about how to take a family portrait while also being the photographer of said portrait.

Yeah, in that situation, that feature seems like it could be useful.

Behold the virtues of the Galaxy SIV’s ability to be controlled with mid-air gestures instead of touch by five shrieking harpies who can’t touch their smartphone screen because their hands are too sticky, or mid-manicure, or filled with wine glasses, or occupied with dish-doing, or wearing Audrey Hepburn style theater gloves.

Well, yes, in that situation, that feature seems like it could be useful.

Or what about the smelly backpacker trekking through Europe who gets an email from a friend who doesn’t speak English, telling him which city they should meet in next, and whose Galaxy SIV automatically translates the email for him?

Or what about the father filming his son’s tap dancing recital, who gets a perfect shot, but needs the Samsung Galaxy SIV to remove the mooning drunk from the background before sending it to Grandma?

Totally. That could be useful, if that happened.

You get the picture.

Yes, these are all cool little software tricks… but at best, they’re ideas for apps you download off of Google Play, not features you launch a new flagship smartphone around. They are gimmicks that will be used by an infinitesmally small subset of users, their utility conveyed with an jaw-dropping degree of tackiness.

The truth is, Samsung thinks the Galaxy SIV is pretty much perfect. That’s why they aren’t really changing how it looks, or how it feels: physically, it’s a very routine hardware update. But in the era of integrated software, hardware and services, you can’t sell a smartphone based upon a faster processor, or more megapixels, or more RAM.. and when it comes right down to it, that’s what is most important to Samsung, which is why everything else just feels so stapled on, so artlessly extolled.

There’s nothing wrong with grounding a hardware upgrade in software upgrades, but here’s the thing: the utility of a new software feature has to be obvious. You need to show, not tell.

This, more than anything else, is Apple’s greatest strength over Samsung when it comes to selling their products to consumers: they can just show you a new feature in action, and it clicks. It works. A hole you never knew existed in the way you interact with computers is suddenly filled. Samsung doesn’t know how to do that, and so they spend three dollars to Apple’s one to try to impart what the point of the products they are making is.

As near as we could tell, the Galaxy SIV is a pretty good phone (although in our brief hands-on testing, none of the gesture or face-tracking software worked as well as Samsung claimed it did, if at all). If you are in the market for an Android smartphone, this is going to be the one you’re probably going to buy.

But Samsung seems like it has run out of tricks. There’s so little to show here that all they could do is tell. Tonight’s launch event proved that Samsung’s entire mobile strategy is, at best, to bludgeon you with claims of their product’s merits untl you give in. And at worst, as they did this evening? They’ll bludgeon you while they bore you.