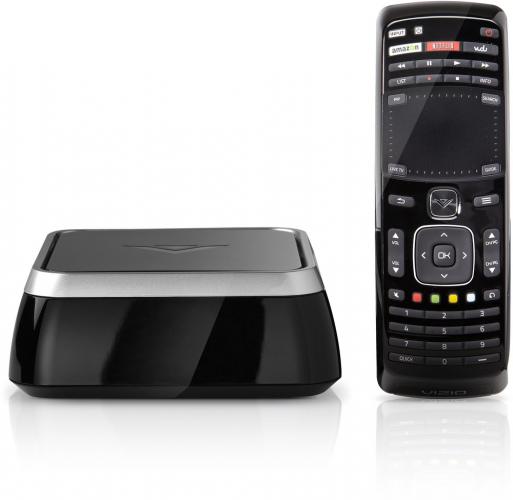 Google TV is everywhere this year at CES, and while I prefer having it integrated into my TV, there are still a number of viable set-top box options, including the VIZIO VAP430 stream player. Announced today by VIZIO and Google, the VAP430 uses WiFi and HDMI to connect your TV to a number of services, including Google TV.

Using the VAP430 stream player, you can turn any ordinary TV into a VIZIO Internet Apps Plus Smart TV with Google TV integration. Users will then be able to enjoy oodles of content and online services via a full blown Chrome browser and the Android Market. Users will also be able to access their own media content stored on any computer or hard drive wirelessly, as well as through USB input. Also, thanks to bluetooth, users can wirelessly share content from their smartphone or tablet straight to their TV.

The VAP430 will be the first V.I.A Plus device released this year and will include the premium remote with QWERTY keypad and integrated touchpad for easy searching and navigation. Preorders of the device are set to begin in the spring, and although price is still a mystery, we have the full press release for you to look at below.

Irvine, CA and (CES) Las Vegas, Nevada – January 10, 2012 – VIZIO and Google today jointly announced the introduction of the VIZIO VAP430 Stream Player, an innovative stream player that turns any HDTV into an enhanced VIZIO Internet Apps Plus&reg (V.I.A. Plus) smart TV that incorporates the latest Google TV. The Stream Player allows consumers to access countless entertainment content and online services with web access through a fully capable Chrome browser, and to also enjoy photos, music and video stored on any computer, hard drive or smart phone connected to a local network and/or the cloud.*

With the VAP430 connected to an HDTV over an HDMI cable, users can quickly and seamlessly access content and services from their favorite apps and websites using the included Bluetooth premium universal remote control with integrated touchpad. In addition to movies, TV shows and music on demand, the VAP430 lets users search the web for even more entertainment options using the Flash-capable Chrome browser.

“We’re excited about what Google TV brings to our new VAP430 Stream Player,” says Matthew McRae, VIZIO’s Chief Technology Officer. “This isn’t just an ordinary streaming box that accesses a few predetermined video services. It’s a true entertainment portal that opens up everything the Web has to offer, as well as all the content consumers already have stored on computers and hard drives. And the incorporation of Google TV and our V.I.A. Plus interface makes it all incredibly easy to setup and a joy to use.”

Using the included premium remote with QWERTY keypad and integrated touchpad, viewers can easily search for any program or content they want from their favorite apps or the Internet. Users can also check out new apps from an ever-expanding Android Market, or access personal media like videos, photos and music that are stored on devices connected to the same home network as the stream player. Images are displayed right on a connected TV set, and sound plays through the TV or a connected audio system.

“We’re thrilled to partner with VIZIO on the launch of their Stream Player,” said Mario Queiroz, head of Google TV. “VIZIO has established itself as a leader in the consumer electronics market. Combining Google TV with VIZIO’s innovative, easy-to-use consumer electronic products will bring more great entertainment and Android apps to the living room.”

Painless Setup, Powerful Capabilities
Part of the V.I.A. Plus ecosystem, the slick yet discreet VAP430 can easily compliment any HDTV using an HDMI cable. Installing the VAP430 and connecting it to the Internet is blazingly fast and simple to do with the built-in setup experience and 802.11n WiFi connection.

The VAP430 also has an HDMI pass-through that lets the user connect a cable or satellite box to the stream player and pass the signal over to the TV for a truly integrated TV watching experience. The smart TV interface overlays the live TV signal so multitaskers can search for the next thing to watch without completely stepping away from what they’re currently watching.

Bluetooth capability also makes it simple to enjoy content from smart phones through the connected TV wirelessly. And with the USB input, connecting any USB drive directly to the VAP430 takes only seconds.

VAP430 is the first V.I.A. Plus device to launch this year, followed by the VBR430 3D Blu-ray player, which combines the features of the VAP430 with Blu-ray’s state-of-the-art high-definition video and audio playback capabilities.

Preorders for the VAP430 will begin this spring 2012. Find out more and sign up to be the first at www.vizio.com/ces

About VIZIO VIZIO, Inc., “Entertainment Freedom For All,” headquartered in Irvine, California, is America’s HDTV and Consumer Electronics Company. In 2007, VIZIO skyrocketed to the top by becoming the #1 selling brand of flat panel HDTVs in North America and became the first American brand in over a decade to lead in U.S. TV sales. Since 2007 VIZIO HDTV shipments remain in the TOP ranks in the U.S. and was #1 for the total year in 2009. VIZIO is committed to bringing feature-rich consumer electronics to market at a value through practical innovation. VIZIO offers a broad range of award winning consumer electronics. VIZIO’s products are found at Costco Wholesale, Sam’s Club, Walmart, Target, BJ’s Wholesale, and other retailers nationwide along with authorized online partners. VIZIO has won numerous awards including a #1 ranking in the Inc. 500 for Top Companies in Computers and Electronics, Fast Company’s 6th Most Innovative CE Company of 2009, and made the lists of Ad Age’s Hottest Brands, Good Housekeeping’s Best Big-Screens, CNET’s Editor’s Choice, PC World’s Best Buy and OC Metro’s 10 Most Trustworthy Brands among many other prestigious honors. For more information, please call 888-VIZIOCE or visit on the web at www.VIZIO.com.