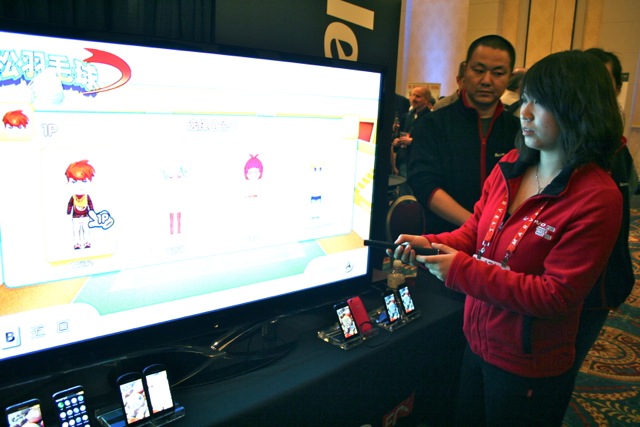 LAS VEGAS, CES 2012 — A few years ago, industry watchers predicted that Apple’s iPhone would fail. They said there’s no way a computer maker could build a good mobile phone. Traditional phone makers like Nokia and Sony Ericsson would bury them.

But look what happened to that.

The TV industry may be facing a similar tipping point. Lenovo, the Chinese computer giant that purchased IBM’s PC business, is here at CES showing off it’s first television — a 55-inch monster powered by Google’s Android Ice Cream Sandwich that streams content, plays games and a dozen other things besides.

It looks pretty slick. It has voice controls, a ton of apps and a big, beautiful screen. Better yet, it’s infinitely configurable.

“It’s the computer experience in the living room,” said a Lenovo staffer manning the booth.

Lenovo’s K91 Smart TV is a big, bright LED panel with a 240Hz refresh rate. It drew a big crowd at CES Unveiled, a press event a couple of days before the show opens. It’s one of the fist devices based on the latest version of Google’s operating system. In the U.S., Ice Cream Sandwich is running only on Samsung’s Galaxy Nexus.

The K91 is 3-D ready. It comes with a touch-enabled remote control with an integrated microphone for voice control. The voice commands appeared to actually work. A booth worker successfully searched for a couple of on-demand movies (in Chinese, of course).

It has a built-in 5 megapixel camera for video conferencing (which also allows users to use face recognition to unlock the TV).

It also comes with a motion-sensitive game controller for playing Nintendo Wii-style games. The staffer played a game of tennis, and the controller looked to work well.

Although the K91 is based on Ice Cream Sandwich, it isn’t a Google TV. There are several other companies at CES previewing Google TVs, including LG, Sony and Samsung.

The K91 runs what Lenovo is calling the “Sandwich interface,” a carousel-type UI that can switch between broadcast TV, streaming video and Internet apps using the touch-enabled remote control. It ws easy and intuitive. The Lenovo staff quickly loaded video on demand, game apps and streaming content. It looked a lot easier to control than other Google TVs.

It comes with about 100 apps preloaded, and is connected to the Lenovo Store, a repository of curated apps. It does not tap into the Google Android Market, the Lenovo staffer said. Nonetheless, the TV plays a variety of music, video and Wii-like game apps. It allows users to view and share photos, videos and other content from the internet, as well as connected tablets and smartphones.

“This is the beauty of Android. It’s open, so there are many applications available,” the Lenovo staffer said.

The K91 TV will also come in a 42-inch model. It will be available in mid-February for an undisclosed price — but only in China.

The Lenovo staffer declined to discuss pricing — or when the TV might come to the U.S. But rest assured, if the set is a hit in Asia, it’ll come to these shores.