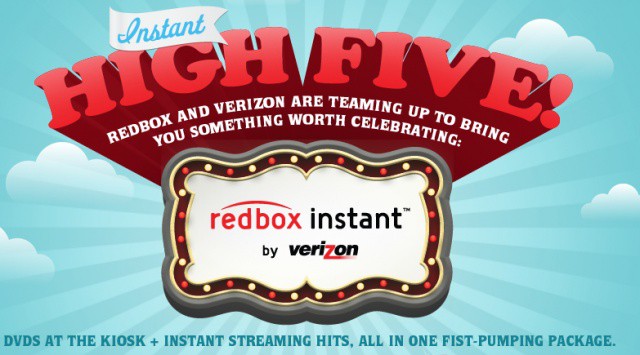 No more waiting in line in front of Walgreens to rent a DVD.

When you think of Redbox, you probably don’t think of streaming movies to your TV or smartphone. Redbox has represented the last remnants of paying to rent physical media, but that’s about to change. Today Redbox announced its plans to take on Netflix with its own movie streaming service. Accompanying apps for Android and iOS will come out when the service begins its invite-only rollout later this month.

Redbox has partnered with Verizon to launch its streaming service, and the invite-only beta will launch sometime later this month.

By combining both disc and digital movie formats, Redbox Instant by Verizon subscriptions offer consumers access to Hollywood’s newest releases, as well as a rich catalog of popular movies, all for a great price. Customers can also use Redbox Instant by Verizon without a subscription and select new releases available for purchase or rental, or simply reserve for pick up at their local Redbox kiosk location, giving movie-lovers more choice and flexibility in how they watch their favorite films.

“We are building a compelling entertainment choice through our ability to support both physical and digital distribution of movies that people love, made possible by the depth of relationships we’ve established with top Hollywood studios and distribution partners,” said Shawn Strickland, CEO, Redbox Instant by Verizon.

The biggest downside to Redbox Instant is that it won’t have TV shows. The service is targeted at mainstream movie releases, and by the looks of its partnerships, Redbox Instant should have more high-profile titles than Netflix. Warner Bros. and EPIX (Paramount, Lionsgate, and MGM) have agreed to distribute their movies 90 days after they premiere in the traditional premium window.

At launch, Redbox Instant by Verizon will be offered via the web, as well as through home entertainment, tablet and mobile devices, including iOS, Android, Samsung Blu-ray Players and TVs with SmartHub, LG Smart TV and Blu-ray Players, and Google TV. More devices will be announced in the coming months.